The Trans-Pacific Partnership (TPP) is a proposed regional regulatory and investment treaty between twelve countries throughout the Asia-Pacific region: Australia, Brunei, Canada, Chile, Japan, Malaysia, Mexico, New Zealand, Peru, Singapore, the United States, and Vietnam (and two other under negotiation are Taiwan and South Korea) with the goal of establishing a free trade area with a population of 800 million, accounting for 30% of global trade and nearly 40% of the world economy. 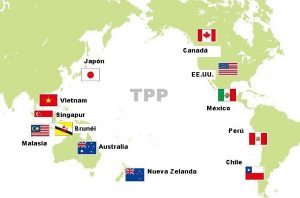 TPP brings great opportunities to Vietnam, unlocking the markets and connecting the economy of Vietnam to USA and other members such as:

• Free trade relations with major markets like the US, Canada and along with elimination of import tariffs from Japan for agricultural products in the TPP will be the real kick for the export of Vietnam

The Asian Development Bank has estimated the impact of the TPP on gross domestic product and found that most member countries would experience moderate economic gains from joining the free-trade bloc. New Zealand, Mexico and Malaysia would likely benefit the most from a successful agreement. Singapore, Australia, Japan and Vietnam also stand to gain.

Participating in the Trans-Pacific Partnership (TPP) would present significant gains for South Korea within its overall policy of negotiating free trade agreements (FTAs) with its major trading partners, according to a policy brief from the Peterson Institute for International Economics (PIIE).

South Korea now has nine FTAs in effect, covering over one-quarter of its total trade, including the “flagship” agreements with the United States and the European Union (EU), and it already has trade agreements in force with seven of the TPP countries – Chile, Peru, Singapore and the US, and also Brunei, Malaysia and Vietnam within its FTA with the Association of Southeast Asian Nations (ASEAN).

FTAs have also, more recently, been signed with Australia and Canada, and South Korea has pursued trade talks with the remaining TPP countries – Japan, Mexico and New Zealand.

Apart from the increased benefits arising out of better market access with those countries within a higher-level TPP agreement, it is noted in addition that TPP participation would complement a number of other current trade initiatives in which South Korea is engaged, such as its FTA negotiations with China, the tripartite FTA with both China and Japan, and the Regional Comprehensive Economic Partnership, being negotiated between ASEAN and its single FTA counterparties – South Korea, Australia, New Zealand, China, India and Japan.

The PIIE points out that, “if successful, these pacts would establish important precedents for economic integration in the Asia-Pacific region. Indeed, a stated goal of South Korea’s trade policy for the next decade is to play an active role in promoting regional integration and serve as a ‘linchpin’ between the TPP and the RCEP.” It would also “be well positioned to bridge Asia-Pacific and intra-Asian regionalism into an overarching Free Trade Area of the Asia-Pacific.”

“In large measure,” it adds, “these significant gains derive from the impact of closer integration with Japan, though South Korea would also gain from increased trade with Vietnam, Mexico, and Malaysia. … In short, the TPP is much more valuable to South Korea (and the US) because Japan is part of the deal.”

In the case of Vietnam, TPP will open up a huge market for export, including to those countries where Vietnam has not yet signed a bilateral free trade agreement such as the United States, Canada and Mexico.

The country’s gross domestic product is expected to increase by 26.2 billion U.S. dollars, or 7.7 percent, from now to 2015, in case the number of TPP nations remains at 11. If Japan officially joins the TPP, the figures will be 35.7 billion U.S. dollars or a 10.5 percent increase. TPP will be an impetus to boosting investment and even creating the second foreign investment flows into Vietnam, the same as when the country was admitted to the World Trade Organization.

Experts forecast that the benefits will come mostly from the United States and Japan, which are currently the country’s largest export markets. Therefore there are many chances for foreign investors since many industries are leaving China, and the most potential place they would switch to is or Southeast Asia, where Vietnam has emerged as an important destination.

However, there are a number of challenges that Vietnam needs to face during its deepening integration, including requirements of origin, copyrights, transparency, equal treatment for SOEs and private sectors, etc. As a result, studying the advantages and disadvantages of Vietnam in TPP and analyzing the impacts of TPP on the economy is an essential preparation for Vietnam businesses to engage in TPP proactively and efficiently.