The actual voice from the tenants is very useful and valuable infromation for the companies under consideration of investing in Vietnam. Kizuna will focus on the tenants of Kizuna and introduce their actual voice through interviews. 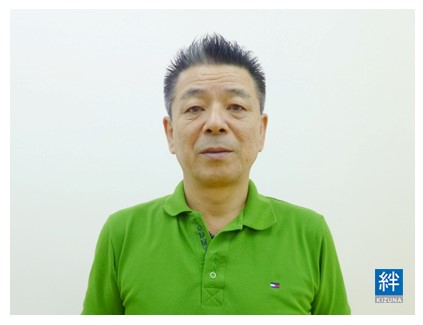 In the 5th interview, we would like to introduce Elle Un Vietnam Co., Ltd. who leased D6 workshop as our 4th tenant. Elle Un Corporation (Head office in Saga prefecture in Japan with the representative Mr Tanaka Seigo) established the subsidiary in Vietnam from March 2014 and Elle Un Vietnam started its operation from July 2014. We are lucky to have a chance to make an interview with Mr Kawazoe who used to be the legal representative of Elle Un Vietnam (at the present time : Mr Takashi Okada).

KZN: Please tell me about your business in Vietnam

Mr Takashi Okada: We are making the sewing of women’s clothing in both Japan and Vietnam side.

KZN: Is it the first time for you to invest in overseas?

Mr Takashi Okada: We invested in Dalian of China 21 years ago and this time we invest in Vietnam.

KZN: Why did you choose Vietnam?

Mr Takashi Okada: We found it necessary to consider Post China countries because labor-intensive industries in China have become more difficult to do business.

We needed to choose one country from Vietnam or Philippine considering of the distance from Japan as the production cycle of our most products is short. After considering of the national characters and cultural levels of these countries, we decided to invest in Vietnam.

KZN: How long did it take for you to make decision since you started the first consideration including the number of times of inspection visit?

KZN: Why did you choose Kizuna?

KZN: Please tell me what you expect for your business in Vietnam

Mr Takashi Okada: At a moment, I cannot spend much time on thinking about these things. It is still deficit in six months from the beginning of operation. Every day we are struggling in order to to get surplus quickly. There are something I consider after we can get the profit though.

KZN: Do you have any interesting episodes or difficulties after you started operation in Vietnam?

KZN: Could you give any messages and advises for the companies under consideration of investing in Vietnam?

Mr Takashi Okada: Good interpreter who can interpret the conversation strictly and honestly is absolutely necessary.
It often happens that the interpreter tries to evade a responsibility by saying not to have said or heard during meeting. The key for Japanese managers to get off from the difficult situation which make them hard to move forward at work is to find an excellent interpreter as early as possible.

Thank you for your cooperation, Mr. Kawazoe.
We strongly wish their great success on business in Vietnam and continue our support for Elle Un Vietnam.